Once upon a time, I was on my way to work in the morning. I was catching the tram to the CBD.

I hadn’t felt awesome before I left home, but as I sat on the tram i started feeling worse and worse. In particular, my nose started running. And I didn’t have any tissues with me. No good.

At a certain point, in the CBD but still not quite at work, I had to do something because my runny nose was becoming unmanageable. So, spotting a 7-11, I jumped off the tram. In a hurry.

With no time to fuck around, I ran into the 7-11 and headed for the pies and sausage rolls, looking for napkins. There weren’t any. Instead, there was a sign saying that napkins were available at the counter. So I ran to the counter.

“I need some napkins please”, I said.

The cashier handed me one tiny napkin. Nowhere near enough for the massive torrent of mucus I’d been holding back for about 15 minutes by that point.

“I need more than that, I have to blow my nose”, I managed to get out without leaking anything anywhere.

With an expression conveying very clearly exactly how few fucks he gave, the cashier refused.

“I don’t have time for that, give me more napkins”, I said.

“No”, came the reply, continuing to be accompanied by the aforementioned expression.

So I blew my nose on the napkin he had given me.

Met with roughly a megalitre of mucous at high pressure, the flimsy and insubstantial napkin disintegrated, sending pieces of wet napkin and most of the megalitre of snot all over the cashier’s counter and all over the chewing gum and chocolate bars in front of it. This procedure left me holding half of an inadequate-for-blowing-ones-nose napkin which was dangling and dripping many ropes of horrible semi-liquid stuff. Once the procedure was complete, every subtle movement of my hand caused an exponential jiggling in the awful thing I was holding, and that jiggling then caused a hundred fresh droplets to rain down onto the counter in a hundred interesting new trajectories.

As I turned and left the store, taking care to put what hadn’t dripped onto the counter, products, and floor into the bin, I said:

Aaaaaaaaaaaaaaand this is what happens when you have people who don’t understand the technology work on one layer of abstraction, using inefficient frameworks to build things that could be built better with just a little skill and hard work, with no incentive or curiosity to care about any of the thousand other layers of abstraction:

I’m guessing their unit tests don’t include running the output through a HTML validator.

I couldn’t find any images with Apple’s original slogan, so I made one:

I’ve been reading The Register for close to 20 years now. Certainly well over 15.

They have been getting less and less impartial, and thus worse and worse at journalism, over the years.

And today I found out that their comment moderation is also totally fair and unbiased. For instance, check out this totally offensive post that they censored:

As you can see, I was totally out of line and very offensive here.

To add to this hilarity, it turns out that the person moderating comments on the article is the same guy who wrote it. Totally fair and not at all a recipe for a little fiefdom of echo chambers.

And as if that wasn’t enough, this comment was censored in such a way that there is no visible mention on the website that a post has been censored. Usually on their site, any moderated post will be replaced with a message saying “this post was removed by a moderator”. So it turns out that not only do they censor any even mildly critical viewpoints, they do it using a special censorship mode that they have implemented, so that nobody can tell that they’re basically nazis.

And that was the day that I stopped reading the register. Chris Williams, their editor in chief, is a little hitler wannabe. 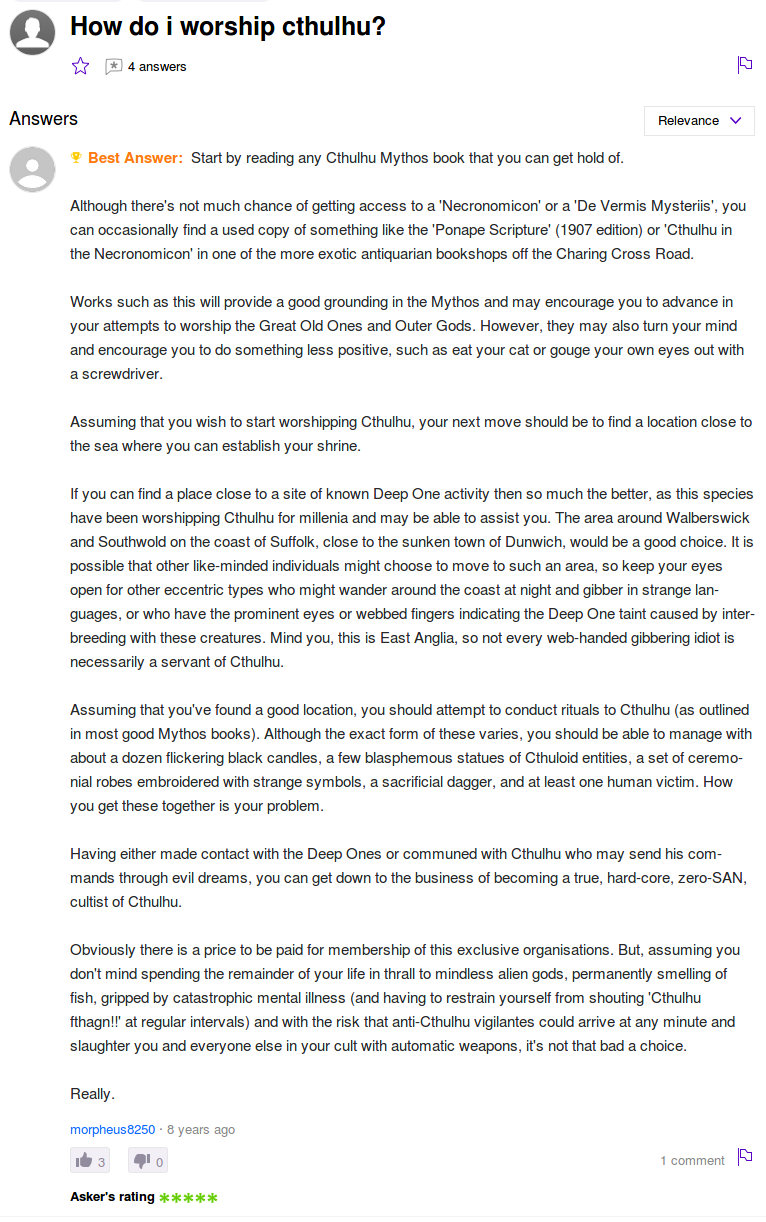 Normally I’d link to the source of this, but friends don’t let friends access Yahoo Answers, so no link today. I’m sure you’ll find it if you try. Instead, here’s the HTML version for your copypasta convenience:


Things I no longer link to, and why: